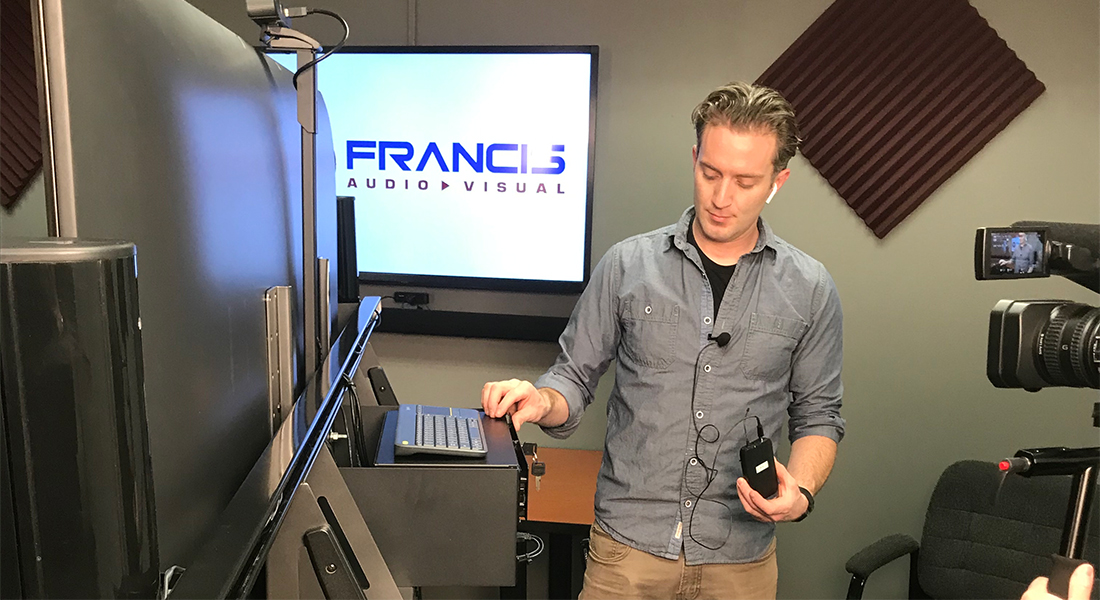 It’s always interesting to see how ideas evolve in our business. Also, how a concept reaches reality, especially something like this. This concept was born last summer with the need to hold video conference meetings in a couple of gymnasiums in local schools that have been re-purposed for a local non-profit that works to help local neighborhoods in various ways.

This and other projects often start out with a client needing to accomplish a goal, but not knowing the most economical solution. In this case it was staff training on a regular basis for the primary need. A secondary need was to show movies.

So, the original request was for a projector and screen made sense. Although that would work, it was not cost effective. Projecting video in a darkened movie theater with a great sound system and room acoustics is one thing, but turning a brightly lit gymnasium with poor acoustics into a video/movie theater is quite another. It would require a super bright projector (big $$$$) and a column array sound system (more big $$$$$). Multiply that time two locations and it simply was not feasible.

So we said, how about a mobile cart with a big TV??? TVs as we learned in another article in this newsletter deliver a smaller image but make up for that largely with better brightness and contrast. Plus the whole mobile cart idea meant this package could be rolled into any classroom and used for small group conferencing. Great concept!

So yes, the TV addressed the video delivery challenge but what about audio? The problem with audio in a gym is, a gym is one big hard-sided box of a room. Hard surfaces and intelligible audio do not play well together. In other words, gymnasium audio (other than a few short announcements during a basketball game perhaps),is pretty muddled.

So Francis AV recommended a pair of “column-array”speakers. Column arrays, (like their big brothers, line arrays, like you see at rock concerts and festivals), keep the sound projection down and off of the ceiling and walls and directed at the people listening on the gym floor, which is exactly what you need.

We were able to utilize two of the client’s existing wireless microphones for group question and answer with remote guests.

Since most of the video conferences originate from other locations, an inexpensive but high-performance digital PTZ camera was chosen for transmitting video out to remote viewers. This camera is like a webcam on steroids. It looks like an oversized webcam but unlike lesser-expensive models, it has great pan-tilt-zoom capability via the included handheld remote control. It even has a built-in microphone (like a webcam) for when the package is wheeled into a smaller room where the handheld mics are overkill.

Lastly, the engine that makes it all works is a(client-provided) mini-PC. This connects to their network with a wired ethernet cable which we always recommend. Never use Wi-Fi for a conference unless it’s your only choice as it will probably start buffering or dropping out on you at some point.